After many plenums of the party’s Central Committee on the work of party personnel, the 15th Plenum- the last of the 12th tenure, ended quickly with a day and a half of working after having identified “special cases” for the Central Committee in the 13th term and planned personnel for the four highest leaders of the regime: the general secretary, the state president, the prime minister and the top legislator.

As usual, the 13th National Congress, held on January 25-Feb 2 and the 15th National Assembly which is expected to be formed in June will formalize senior leadership and legalize leaders of the state agencies in the way “party nominate, people, elect.”

After the “unrest” of the 12th Congress, the power has focused highly on the General Secretary as it is today. “Surprise” is unlikely to happen at the 13th Congress, the “concerns” about standards or regulations will be justified, but the reality of operating the totalitarian party system shows that when the concentration of power is higher, power transfer faces more challenge.

That will be justified

Usually, the general public is only interested in “surprise” for the list of the “four highest positions/ four pillars” proposed by the Central Committee before being submitted to the Congress but with no consensus. According to the leaked information that the title of General Secretary will continue to hold by Mr. Nguyen Phu Trong, Prime Minister Nguyen Xuan Phuc is expected to be the State President. Here are two special cases that have just been introduced. The titles of Prime Minister and Chairman of the National Assembly will be held by Pham Minh Chinh, the current head of the Central Organizing Commission, and Vuong Dinh Hue, the current Secretary of the Hanoi Party Committee, both are still eligible under the age regulations. 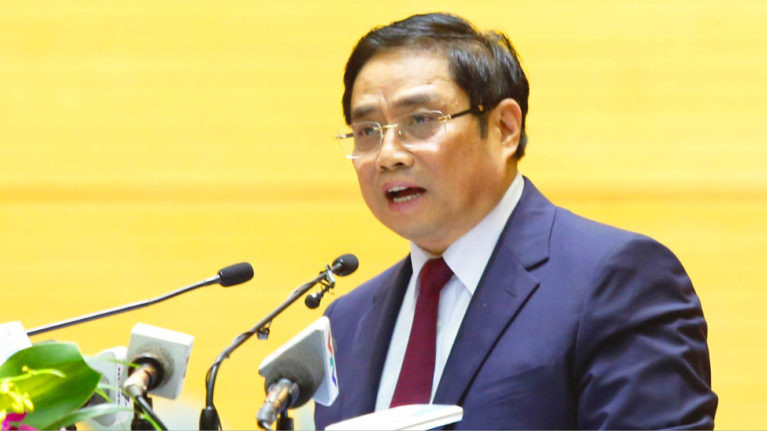 Party operates under the charter and political analysts believe that the Politburo, the Central Committee needs to explain “special cases” when Mr. Nguyen Phu Trong, who has held two consecutive terms 11th and 12th as General Secretary while the current party’s Charter adopted by the 11th National Congress on January 19, 2011, stipulates that a general secretary hold the position for no more than two consecutive terms. There will always be a reason in “urgent” situations. Moreover, Decision No. 244-QD / TW in 2014 on the regulations on the election of the party ensured that Mr. Nguyen Phu Trong continued to hold his position in the third term. Former Prime Minister Nguyen Tan Dung was introduced by many delegates in the 12th Congress but he still had to withdraw, unable to break the decisions of collective leadership on party personnel.

However, the problem is whether there is a plan to amend and supplement the Charter when “special cases” appear more and more in recent terms?

According to the announcement from the head of the Central Commission for External Relations, the 13th Congress will have 1,587 delegates representing more than 5.1 million members, of which, there are 191 members of the current Central Committee, 1,381 deputies elected at the congresses of the Party Committee directly under the Central Committee, and 15 designated deputies.

Associated with the reality of party reorganization and anti-corruption during the term, they are most of the party members that have been “screened” from the congress at the provincial and city levels and the equivalent just ended in the last month of October 2020 and the remaining members of the Central Committee in the 12th term, except for those who were “expelled” because of their ideological deterioration, lifestyle ethics, and law violations.

During the 12 term, General Secretary Nguyen Phu Trong always “worries” about party cadres. According to the Party’s Platform and Charter, the party members are the “vanguard” team, linked by the communist ideology, willing to accept the value system, Marxist-Leninist ideology and “firm” with absolute loyalty to the party and obedience to totalitarian discipline, and “sacrificing personal interests” for the party … However, reality shows that in the context of the transition to a market economy, a large number of party members have “self-evolved,” “self-transformed,” and were tempted by rights and money, not only the low-level party members but also the high-ranking “comrades” with him in the Politburo, the Central Committee.

No consensus about selecting his successor is probably one of the reasons why he was continuously introduced by the 15th Plenum as General Secretary to be elected at the 13th Congress.

The results of the election at the meeting would be likely that Mr. Nguyen Phu Trong will continue his third term as General Secretary.

What concerned political analysts are how the policies, especially anti-corruption and internal rectification, that he has launched, but is unfinished, will continue. In addition, finding a successor for him is also complicated with the collective leadership mechanism. They speculate who will be the next General Secretary with the possible risks.

The theory of political science by Bruce Bueno de Mesquita and Alastair Smith points to the real political rule for rulers: leaders do whatever they do to keep themselves in power. The way in which the rule operates is generalized as follows: no “king” is ruling alone but needs to have “keys.” The key to power in a position of power. Therefore, you must first pull the keys on your side, then control resources, “rights and money” to keep them support and loyal to you, and at the same time need to remove the factors opposing you.

“Sit on a throne to rule and it will rule over you.”

The reality of operating a totalitarian communist regime shows that the longer they hold power, the more concentrated power is, the more challenging the transfer of power becomes.

The regime pursues power, where are the people?